Research and sampling of biological traces

The DNA of a person can be transferred by contact with objects or people. This DNA can be derived from cells from different arrays, blood, semen, hair elements, epithelial cells.

These arrays are identified by:

The epithelial cells are taken from areas where the cells may have been left.

There are three sampling protocols: 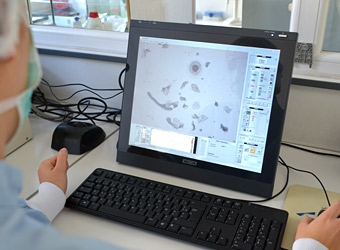 Laser microdissection is a relatively new and complex technology that isolates a cell using a laser beam in order to avoid mixing of the DNA samples.

This technique relies on the use of an Infrared laser (low energy) that allows the capture of cells by adhesion on a plastic film. This technology is particularly suited to the isolation of single cells, allows preserving the integrity of DNA.

The human genome comprises repeat sequences that vary by size. These repeating units are 3-5 bp. Each allele is defined by the number of repeating units (12, 13, 14 …, 17). The analysis of nuclear or autosomal DNA is based on the study of a certain number of loci. This analysis allows for establishing a clear genotype for each individual. The genetic fingerprint is the result of the study of several loci.

The sex chromosome X is present in all nucleated cells of all male and female individuals. A woman has two X chromosomes and men, one X chromosome and one Y chromosome. The analysis of STR (Short Tandem Repeat) specific for this chromosome allows the study a number of loci.

Analysis of these specific markers of chromosome X is performed in addition to the autosomal analysis in complex heritage cases and corpse identifications.

The analysis of the Y sex chromosome allows the identification of males from the study of a number of loci. This study allows the determination of the Y haplotype or the Y DNA profile. This analysis is much more sensitive than the analysis of nuclear DNA but only allows for establishing the paternal lineage.

The analysis of this DNA enables to establish the maternal lineage. This DNA has no repeating units. By studying two hypervariable regions, HV1 and HV2, through sequencing, the results can be obtained by comparison with a reference sequence. This comparison allows for establishing the differences between the sequences analyzed and the reference sequence (Anderson).

This analysis is useful for the identification of the species.

This analysis is based on the study of SNP (Single Nucleotide Polymorphism), i.e. the change of a single base on a locus (DNA region). To define the apparent morphological characters, the study is carried out on many of these sudden variations, at the loci of autosomal chromosomes, involved in pigmentation.

The Research and Innovation department of the laboratory has studied different apparent morphological characters of pigmentation and could analyze:

Ongoing research in our laboratory and in European research laboratories will, in the very near future, enable to increase the number of these apparent morphological characters.

However, it is important to emphasize that the analysis of apparent morphological characters can be made from a biological trace:

This analysis to estimate the apparent morphological characters is not recordable in FNAEG (Fichier National Automatisé des Empreintes Génétiques).